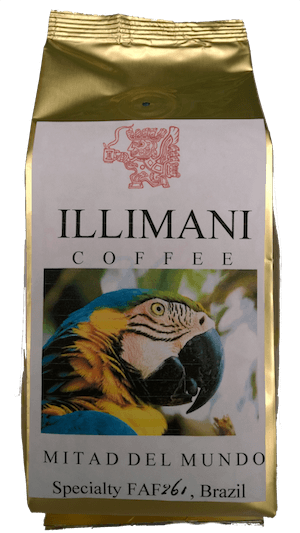 ‹   Back to Specialties
Prev / Next

Fazenda Ambiental de Fortaleza is a farm in Mococa where the owners and the surrounding farms are restoring the natural habitat for plants and animals in combination with organic coffee growing.GENERAL GROWING INFORMATION Varieties: Tupi and Catuai Natural  Harvest: May August Altitude: 1000 – 1400 Meters Drying Method: Sun

SPECIALTY COFFEE from BRAZIL
STATE OF SAO PAULO/MINAS GERAIS
The coffee from Fazenda Ambiental Fortaleza (“FAF”) grows in the northern part of the state of Sao Paulo bordering with the southern part of Minas Gerais. This area is in the mountains and benefits from its climate with warm days and cool nights due to its bigger distance from the ecuator.
In 1850 the farm was already used as a coffee plantation. Being owned by the and run by the Barretto family for over a century, the farm was taken over by Silvia Barretto and her husband, Marcos Croce in 2002, They have been working on transforming the farm from a traditional classic coffee plantation to a farm of sustainable organic agriculture and functioning as a model for other coffee producers to transform to organic and sustainable coffee production.
Traditionally coffee production in Brazil has been mainly massive and for the world market. The coffee in Brazil was classified as Rio or Santos, where the first was bad quality and the second better.
Since 10-15 years coffee changed from a regular commodity towards a more specific product of higer quality. Therefor it is possible for Fazenda Ambiental de Fortaleza to grow organic coffee, which requires more labour than conventional coffee.
The coffee from FAF comes from the plantation itself and from coffee producers who are working together with FAF to improve their quality. The process of the coffee is mostly natural (some are honey processed and/or washed). The organic coffee’s are shade grown.
Shade grow organic coffee at Fazenda Ambiental de Fortaleza
The following coffee is grown at the Fazenda itself (altitude around 1000 meters):
Number Variety Production Taste
258: Mundo Novo – Natural – Organic: TASTE nougat, almonds, cherry, butter, sweet
261: Tupi and Catuai – Natural – Organic: TASTE cocoa, nougat, jammy, peach, sweet honey finish
340: Icatu – Natural – Organic: TASTE cocoa, jammy, long finish, mild acidity
Furthermore we offer coffee from Celso and Gertrude, who work with the Fazenda together and their coffee is nature friendly, that means as much as possible efforts are taken to preserve the biodiversity. The coffee is also naturally processed, which means it is sundried on special drying tables. The following coffee’s are from Celso and Gertrude grown at Boa Vista farm: